87 farmers carried the 50 m x 50 m Food Not Coal banner, to protect their productive agriculture and to highlight their area is threatened by the coal power plant development.

Greenpeace Indonesia Climate and Energy Campaigner Arif Fiyanto explained how a power plant in Batang would threaten neighboring productive agricultural land which can be harvested three times a year.

He underscored that this power plant will threaten the food security program, a priority program of President-Elect Joko Widodo, considering that Indonesia’s imports rice from various countries. Greenpeace Indonesia argues that the Master Plan for the Acceleration and Expansion of Indonesian Economic Development (MP3EI) project must not undermine food security or farmers and fishermen’s employment.

By the same token, the proposed Batang coal power plant would make up part of the 117 new proposed coal fired power plants that increase Indonesia’s vulnerability to climate change. 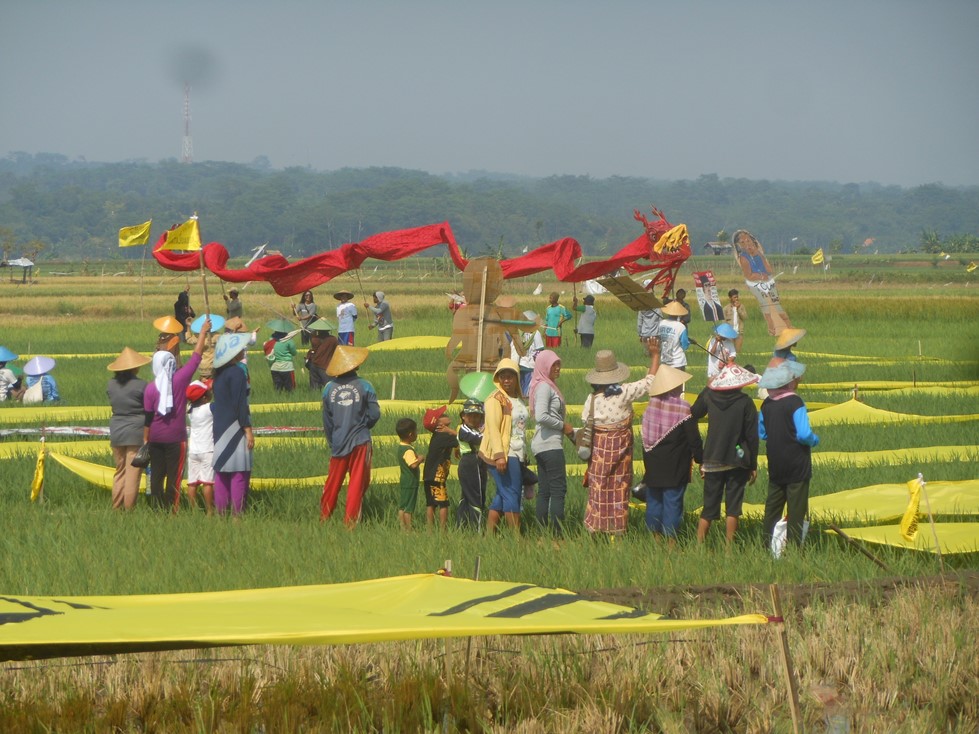 The Batang plant alone would result in 10.8 million tons of CO2 emissions per year, equivalent to emissions throughout Myanmar in 2009.

“Coal power plant development in Batang threatens food sovereignty, harms cultural and traditional Indonesian agriculture, and accelerates the pace of global climate change. This project jeopardizes the livelihoods of tens of thousands of people who consist of farmers, fishermen, and other community livelihoods that depend on agriculture and fisheries,” said Arif.

He added, what is happening in Batang is not just an unresolved land acquisition issue for the power plant, which is what the previous government always conveyed through the media. “The real story here is about the ten thousands displaced fishermen and farmers, who are struggling to maintain their food production, life, and livelihoods for Indonesian food sovereignty. More than that, they are defending the Earth from catastrophic climate change,” he urged.

Wahyu Nandang Herawan, Public Defender of the Indonesian Legal Aid Foundation (YLBHI), emphasized that the Indonesian government must act wisely in relation to coal power plant development in Batang. “Residents of Batang have refused and landowners have chosen not to sell the land, therefore the government should announce a firm stand not to build the coal power plant” explained Herawan.

“If they continue to build the coal power plant, it will potentially become a never-ending conflict and a catalyst for serious human rights violations,” he said on the same occasion. The project is a fruit of collaboration between the government and the private sector, based on an agreement signed on 6 October 2011, to build a power plant in an area of 226 ha. However, since the beginning of 2012 residents have rejected and protested against the planned project. Because of popular resistance PT Bhimasena Power Indonesia (BPI) failed twice to meet the loan disbursement deadline set by the Japan Bank for International Coorperation (JBIC) as the key financier, and announced “force majeure.”

BPI is a consortium of Japanese companies and the two Indonesian companies, J-Power with a stake of 34%, Itochu with 34%, and PT Adaro Power, a subsidiary of Adaro Energy, with a 32% stake.