Since the Industrial Revolution, the average global temperature is on the rise. On January 15, 2020, the United Nations (UN) announced that the average temperature for the past 10 years was the highest in the observed history. Indeed, the global average for the year 2020 was the second highest since the record started in 1891.

Such extreme changes in the temperature have brought heat waves, melting glaciers, lead to extreme weather events like drought and floods, as well as endangering the economic foundation that we depend on for our livelihoods. Those living in poverty are particularly affected by these extreme events. To promote measures against climate change, we have to break away from fossil fuels as soon as possible. At the 2015 Conference of the Parties to the United Nations Framework Convention on Climate Change (COP24), the “Paris Agreement” was adopted to “keep the average temperature rise well below 2℃ and pursue effort to limit it to 1.5℃ compared to before the Industrial Revolution”. Given that the agreement has begun its implementation phase in 2020, the movement toward “decarbonization” is accelerating around the world.

２．Issues of coal fired power plants that are preventing decarbonization

Coal-fired power plants emit a large amount of CO2 when coal is burned during generation. This emission is protruding among the fossil fuels. Realizing the coal-fired power plants currently under construction to start operation would mean locking in massive CO2 emissions for the decades to come. 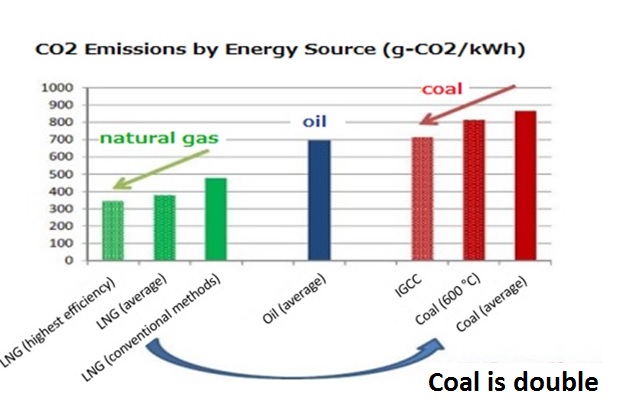 Another problem is that Japan’s “Best Available Technology  (BAT)” is ultimately not used in the countries where they export coal power plants.

We examined pollution control measures and emission concentrations related to sulfur dioxide (SO2), nitrogen oxides (NOx), and dust for 14 projects for which we could get related documents such as environmental impact assessments out of the coal-fired power projects supported by the Japan Bank for International Cooperation (JBIC) and the Japan International Cooperation Agency (JICA). These 14 projects include 1 case expected for JICA’s support and 1 case expected for JBIC’s support. And we compared them to the data of 4 coal-fired power plants in Japan for which we were able to obtain similar related information. The result was clear that emission concentrations in overseas projects tend to be much higher than that of domestic power plants (see attached table). This not only means that local residents may harm their health by being exposed to highly concentrated pollution emitted from coal fired power plants built by Japanese support, but would mean that productivity or safety of crops in the same area may be adversely affected.

It is hard to say that JBIC and JICA are taking necessary measures, such as requesting or asserting influence on local developers/business operators to maintain and improve the surrounding environment and local residents’ livelihood. The fact that Japan exports technologies that allow emission of pollutants in high concentration, excusing itself by saying these emission levels are meeting local standards mean that  Japanese public and private sectors are content with the double standard of pollution measures between domestic and overseas projects.

The problem is not only a matter of high concentration of pollutants. In the first place, fundamental measures to reduce pollutant emissions are not applied. According to the survey of the SO2 and particulate (PM) removal technologies of coal-fired power plants funded by JBIC, half of the JBIC projects did not have any desulphurisation equipments installed, and approximately 80% of the projects did not use appropriate particulate removal technologies such as fiber filters and low temperature electrostatic precipitators (ESPs). It is clear that the concentration of emitted pollutants is much higher in exported coal-fired power plants than what takes place or would be considered acceptable domestically in Japan.

Exporting coal-fired power plants would mean locking in coal in the recipient countries’ power supply. Additionally it also causes various environmental and social problems for many years in those countries. To avoid these problems, the construction of coal-fired power plants must stop now and be switched to a true BAT export that will have a positive impact for residents and for the future.

Comparing the combustion technology in coal-fired power plants funded by JBIC, and other power plants constructed at the same time clearly shows that those funded by JBIC are of a lower efficiency than the global average (Table 1).

Table 1. Comparison of combustion technology between coal-fired power plants funded by JBIC and other electricity generating facilities around the world (all facilities were either planned or constructed after 2010). [1]

Additionally, Table 2 shows a comparison of plant capacity as provided by Japan, China, Korea, India and Russia from SC and USC boilers that are either operating, being constructed or being planned in South Asia and South East Asia. Although there is debate that if Japan does not provide support, other countries will then support building low-efficiency plants, it is clear that Japan is not the only country providing highly efficient facilities.

Table 2. A comparison of plant capacity (MW) provided by Japan, China, Korea, India and Russia from SC and USC boilers that are either running, being constructed or being planned in South Asia and South East Asia. [2]

Japan is the only country among G7 countries that still promotes coal-fired power generation and spends massive funding coal. The world is looking at this with frosty eyes.

There are three Japanese public financial institutions that support businesses related to fossil-fuels in overseas countries.

In particular, criticism is growing over Japan’s investment in and financing on coal, gas and oil-fired power plants. Since 2003, JBIC, JICA and NEXI have financed 30, 7 and and 20 coal-fired power generation projects respectively. Additionally, JBIC and JICA have invested and loaned a total of 15.2 billion USD and 5.9 billion USD respectively, while NEXI has insured a total of 5.5 billion USD. Since 2009, JBIC, NEXI, JICA and ADB have financed 19, 9, 17 and 17 power generation businesses other than coal respectively. Those financial amounts were 6.8 billion, 1.9 billion and 5.1 billion and 227.7 billion. (Table 4)

Table 4. Number of coal-fired power plant projects approved for financing and the total amount loaned or insured by JBIC, NEXI and JICA (between 2003 and 2020)

Table 5. Number of gas- and oil-fired power plant projects approved for financing and the total amount loaned or insured by JBIC, NEXI and JICA (between 2009 and 2021)

There is some overlap of projects approved for financing between financial institutions. The total number of coal-fired power generation projects approved for financing between all three institutions is 37: 13 in Vietnam, 9 in Indonesia, 8 in India, 2 in Morocco, and the remainder in various other countries. The total energy generation of 37 coal related projects is approximately 38.940 GW, with estimated annual CO2 emissions of approximately 230 million tons. [3] For gas- and oil-fired power generation, the total number approved is 53 : 8 in Bangladesh, 6 in Uzbekistan, 6 in Thailand, and the remainder by others.

In addition to power plants, these public financial institutions and Japanese companies are involved in coal mining, infrastructure development including gas pipelines and FSRU (Floating Storage and Regasification Unit) development associated with the export of fossil fuels. Their forgoing attitude towards fossil fuel promotion is being questioned, as what are being brought are impediments of CO2 emission reduction,  destruction of the environment, and human rights abuses.

４．Japan going against the world’s coal exit and decarbonization

Japan, while increasing plans to construct new coal-fired power plants domestically since 2011, has also been supporting fossil fuel related projects overseas. Here, both public and private sectors are propellers. The numbers of projects provided public support are as indicated in Table 4 and 5. Private banks are providing huge support too.  According to the report published by the U.S. environmental NGO Rainforest Action Network (RAN) in March 2021, 2 Japanese major banks ranked-in the 12 worst major private banks in the world for funding fossil fuels in the five years after the Paris Agreement was signed (during 2016-2020): Mitsubishi UFJ Financial Group (MUFG) is in the 6th place with US$147.7 billion and Mizuho Financial Group is in the 8th place with US$123.5 billion.

The Japanese government has tightened the export requirements for coal-fired power generation in June 2020 and further tightened it in June 2021, reflecting the agreement at the G7 Summit the same month.[4] However, despite committing to “an end to new
direct government support for unabated international thermal coal power generation by the end of 2021,” Japanese government is excluding from this commitment the plans they have already started some consideration or projects where the constructions are now taking place. Thus, their policy review is demanded.

The world is making progress in coal exit and decarbonization. Public financial institutions in major developed countries such as the U.S. and the EU members have made a clear position that they will not allow construction of any new coal-fired power plants in their country unless they are equipped with CO2 emission reduction technologies (CCUS etc.). They are also accelerating their steps to phase-out domestic coal-fired power plants.

Table 6. Target year for retirement of coal-fired power plant in the G7 countries

In many countries, measures toward decarbonization are going forward, such as divestment from corporations having weight on fossil fuel projects and considerations to introduce carbon pricing.

For Japan to shift toward a decarbonized society in line with the Paris Agreement, the Japanese government, public financial institutions, private banks and companies should dramatically shift from coal promotion immediately and should support the future development of developing countries by switching from large-scale intensive power generation such as coal and nuclear to regionally distributed power generation such as renewables.