Status of Power Development in Indonesia

Indonesia has the largest population (265.02 million as of 2018) and the biggest highest energy demand of any country in Southeast Asia.

The current president of Indonesia, Joko Widodo, has advanced a program to develop 35 GW of power plant capacity in the period from 2015 to 2019. According to the Director General for Electricity of the Ministry of Energy and Mineral Resources (ESDM), as of year-end 2018 only 2,899 MW (8%) of the 35 GW program has begun commercial operation, and the program is now expected to be completed in 2024. [2] In the 35 GW program, coal power plants account for 52.3% (18,739 MW), the largest of any source. [3]

In its Electricity Supply Business Plan (RUPTL) 2019-2028, PLN projects an electricity demand growth rate of 6.42% per year, with a total generation capacity development of 56,395 MW planned during this 10-year period. The composition (%) of planned development by type of power plant is shown below. Coal is the largest.

With this development, the composition of power sources in 2028 will be 54.4% coal, 23.2% renewables, 22.0% gas, and 0.4% oil. [1] In other words, Indonesia’s high reliance on domestic coal as a power source will remain unchanged. (Note: The RUPTL figure for renewables includes large hydropower, which should be excluded from renewables.)

Status of Power Development for the Java-Bali Grid

An excess of electricity supply, however, has been recently pointed out, given that the reserve margin of the Java-Bali grid is around 30%. The actual figures in 2018 were 34,519 MW net installed capacity and 27,070 MW net peak demand; that is, a reserve margin of 28%. [1]

In addition, the reserve margin of the Java-Bali grid in the 2019-2028 period comes to 26-45% when we calculate it based on RUPTL (2019-2028). In other words, excess electricity supply will remained as an issue for the Java-Bali grid.

As indicated in Table 2, the Lontar 4 plant began commercial operation in 2019, Batang is slated to start in 2020, Tanjung Jati B (Units 5 and 6) in 2021, Cirebon 2 in 2022, and Indramayu 2 in 2026. Considering the Java-Bali grid’s reserve margin, however, the necessity of all of these projects is in question. Besides, each project has drawn international criticism from the viewpoint of climate change, and some projects, such as Batang, Cirebon 2, and Indramayu 2, have been delayed due to strong opposition by local communities who are concerned about the adverse impacts on their livelihoods (including farming and fishing) and health. 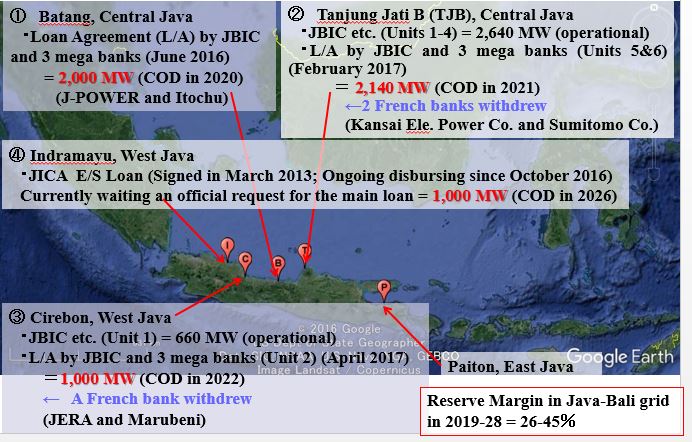