The 2020 Scorecard on Insurance, Fossil Fuels and Climate Change
~Tokio Marine, MS&AD and SOMPO ranks 18th out of 30 due to large exceptions in their policies~

An international network of environment NGOs “Insure Our Future (*1)” published the rankings of 30 leading insurers worldwide (*2) for their policies on insuring and investing in coal, oil and gas as well as their efforts to address climate change. The results show that insurers that have adopted a policy to end/limit insurance underwriting for coal projects such as AXA, Swiss Re, Hannover Re, Zurich, Munich Re, etc. rank relatively high. Japan’s major non-life insurance companies Tokio Marine, MS&AD and SOMPO announced a policy on underwriting coal-fired power projects in September 2020, but they ranked 18th due to large exceptions in the policy (see Table 1).

Table 1: The Ranking and Scores of 30 leading insurance companies in the world on their Insurance underwriting policies for coal projects 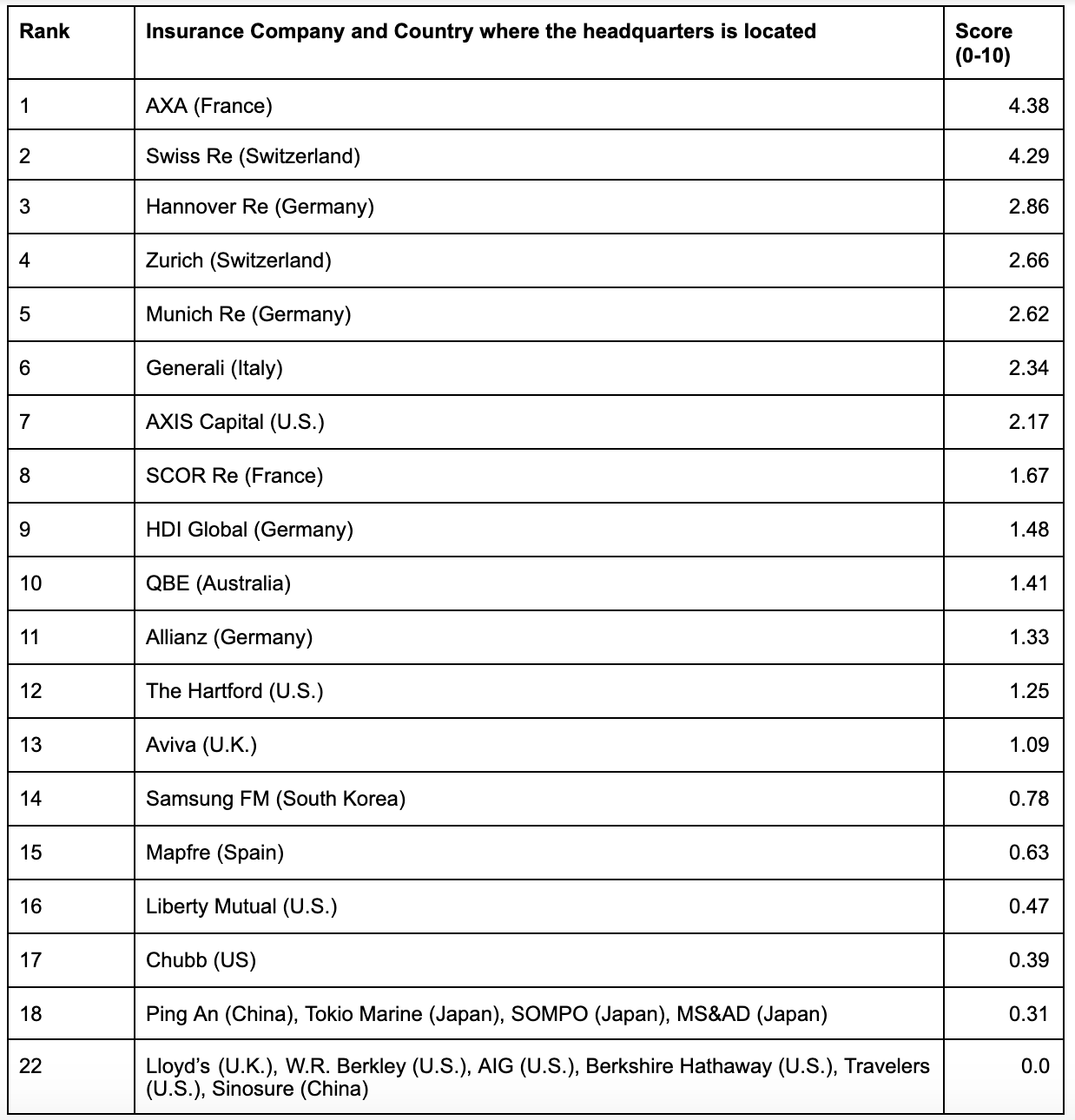 Insure Our Future (2020), “The 2020 Scorecard on Insurance, Fossil Fuels and Climate Change”

Since the Insure Our Future (formerly Unfriend Coal) launched in 2017, at least 23 leading insurers have ended or limited cover for coal projects. These insurers control 12.9% of the primary insurance market and 48.3% of the reinsurance market. As of November 2019, 17 insurance companies in Europe, the U.S. and Australia adopted policies on coal underwriting. However, it has become clear that a growing number of insurance companies are withdrawing from coal-related projects, as 6 companies in regions that have been lagging behind: the U.S., the U.K. and South Korea, have adopted new underwriting policies on coal. Developers are now finding it difficult to insure new coal projects.

Japan’s major non-life insurance companies Tokio Marine, MS&AD and SOMPO announced in September 2020, that they would not underwrite insurance or invest in coal-fired power projects. However, their policies include exceptions where, upon careful consideration, it may undertake cases depending on the national policy and energy situation in the relevant country and efficient power generation technologies. Moreover, their policies do not cover insurance underwriting and equity/bond investment of companies that are highly dependent on coal-fired power generation or companies planning to build new coal-fired power plants which is insufficient to ensure consistency with the long-term goals of the Paris Agreement.

The Insure Our Future calls on the world’s leading insurance companies including Tokio Marine, MS&AD and SOMPO to end underwriting and investment in coal projects and coal-related companies, and a phase-out from oil and gas projects in order to ensure consistency with the long-term goals of the Paris Agreement.

*1: This is an international campaign that demands insurance companies to stop underwriting and investment in coal projects, and has published rankings every year since 2017. Previously, it was known as the Unfriend Coal campaign with a focus on the coal sector. However, in June 2020 it expanded its demands to include oil and gas and rebranded as Insure Our Future. For more information, visit https://insureourfuture.co/.
*2: Of the 30 insurance companies surveyed in this report, 27 are leading primary property and casualty insurers and reinsurers, and 3 are life insurers.

Please see the Press Release by Insure Our Future for more information.