18 March 2019: Japanese and International NGOs have placed a full page advert in the Financial Times calling the Japan Bank for International Cooperation (JBIC) to not fund Van Phong 1, a coal power station proposed for construction near the untouched and picturesque Van Phong Bay in Vietnam.

A funding decision the controversial and highly polluting plant is imminent with JBIC’s 45 day consultation period concluding on 20 March.

Van Phong 1 would use highly polluting technology, violate climate change-related commitments made by Japan and produce air pollutants at rates up to nine times higher than the average new Japanese coal-fired power station.

With renewable energy prices dropping fast in Vietnam, the reputational damage this project will cause to Japan is compounded by the significant risk of it becoming a stranded asset.

“President Abe has called on world leaders to take Japan’s lead on climate. If JBIC can’t even follow Abe’s lead on climate change then how can he expect other countries to take him seriously?” said Market Forces Executive Director, Julien Vincent.

“With international investors increasingly viewing coal as a stranded asset and moving finance out of the sector, many institutions will question why Japan continues to pursue these risky deals.”

The OECD Sector Understanding on Export Credits for Coal-Fired Electricity Generation (OECD Sector Understanding) regulates the funding of coal-fired power stations by certain countries, including Japan. According to the Understanding, for Japan to provide public finance, Van Phong 1 would have to use ultrasupercritical technology or have an emissions intensity lower than 750g CO2/kWh.

“By funding out-dated coal technology, Japan would be directly violating its international commitments through the OECD. JBIC should immediately rule out funding this polluting project.” said Yuki Tanabe of the Japan Center for a Sustainable Environment and Society.

“JBIC guidelines recommend that the people affected by the projects that they fund are consulted. Vietnamese people who live around the projects have not been told about how the project might impact them or asked about what they need from the project.”

“By ignoring these best practices, JBIC puts itself at risk of harming these communities.”

Van Phong 1, if constructed, will also worsen air quality in Vietnam. New coal-fired power stations in many countries, including Japan, use technology to prevent the emission of air pollutants at such extraordinarily high levels. 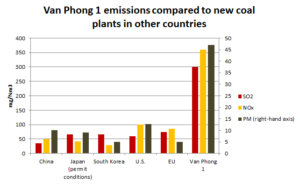 “By 2030, if all planned coal-fired power stations in Vietnam are constructed, there would be a 19,220 premature deaths per year. If it’s not acceptable for Japan, why are JBIC and Sumitomo dumping this technology on Vietnam?”