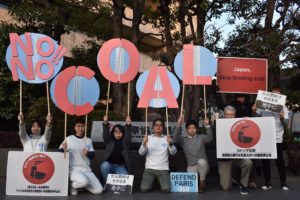 On February 14th, Japanese and International environmental NGOs submitted the request letter to the Japanese government and related organizations regarding the Van Phong 1 coal power plant project in Vietnam.

We, undersigned organizations, urge Japan not to finance the Van Phong 1 coal power plant project in Vietnam. Japanese export credit agencies, the Japan Bank for International Cooperation (JBIC) and the Nippon Export and Investment Insurance (NEXI) are currently considering to support this project, in contradiction to Japan’s OECD commitments and their own policies.

On 4 February 2019, JBIC and NEXI officially began considering providing finance and insurance to Van Phong 1, and disclosed the Environmental and Social Impact Assessment (ESIA), completed in November 2017. The project is anticipated to use supercritical technology, which would be expected to have an emission intensity of between 750g and 850g CO2/kWh.

Breach of the OECD Sector Understanding

Under the OECD Sector Understanding on Export Credits for Coal-Fired Electricity Generation (OECD Sector Understanding) , to which Japan is a party, export credit finance can only be provided to projects larger than 500MW that either 1) use ultrasupercritical technology, or 2) have an emission intensity lower than 750g CO2/kWh. As neither criteria applies to Van Phong 1, JBIC and NEXI must not support this project*2 .

The transitional clause of the OECD Sector Understanding states that:

The transitional clause of the OECD Sector Understanding exempts projects which have a “fully completed technical feasibility study and environmental and social impact assessment” by January 1, 2017, “and provided that an application for export credit support for any such project is submitted and acted upon expeditiously.”

Although there were initial ESIAs completed in 2011 and 2015, the most recent ESIA was completed in November 2017. As Van Phong 1 has a completely new, further developed ESIA that supersedes the previous documents, it does not fall into the this exception.
Furthermore, the earlier 2011 and 2015 ESIAs were completed 8 and 4 years ago respectively. Therefore, it cannot be argued that the project has been “submitted and acted upon expeditiously.”

JBIC and NEXI are attempting to misconstrue the OECD Sector Understanding.

Human rights and other environmental concerns

In addition, there are human rights concerns associated with Van Phong 1. The communities in the area have expressed concern to Vietnamese civil society organisations about the effect of the coal ash and the impact of discharge of cooling water on the fish in the bay. The Vietnamese civil society organisations report that while the communities on the site of coal-fired power station have been resettled, there has been little thought about alternative livelihoods for farmers and nearshore fisherfolk.

Since January 2017, JBIC and NEXI have agreed to support five coal-fired power projects, and are expected to support another seven (including Van Phong 1) in the world. They would emit up to 71.3 million metric tons of CO2 in total annually — equivalent to the per capita emissions of 7.4 million people in Japan*3 . The construction of these would defeat the goals of the Paris Agreement. In order to limit temperature rises to 2ºC, let alone the 1.5ºC goal the IPCC now recommends, the Executive Director of the International Energy Agency has stated, “We have no room to build anything that emits CO2 emissions.*4 ”

The Japanese government is openly seeking to limit global warming. Prime Minister Abe himself has publicly committed to halting runaway climate change, which he linked to the unprecedented devastation in 2018 from torrential rain in western Japan, heatwaves in North America and Europe, and typhoons in the Philippines *5. Japan’s latest Basic Energy Plan states that the Government of Japan “supports the introduction of power generation equipment that is in principle at or above ultra-supercritical pressure, the global state-of-the-art, taking into account OECD rules”*6 . Funding the Van Phong 1 project blatantly contradicts Japan’s own energy plan and its commitments under the Paris Agreement.

We urge JBIC and NEXI to stop further consideration of Van Phong 1, and urge Japan not to support any new coal power projects.