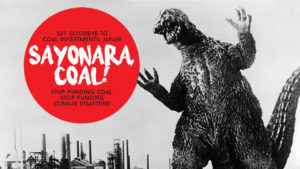 Civil society organisations (CSOs) from around the world gather to stage a protest action against JBIC and Japanese government at the Thursday, 16th November. This action,  held in Bon (during COP23) , is to condemn Japan’s investments in Southeast Asia, particular on the Cirebon coal fired power plant in Indonesia and to against Japan’s continued investments on coal.

Civil society organisations (CSOs) from around the world gather to stage a protest action at the Thursday, 16th November to condemn Japan’s investments in Cirebon coal fired power plant, in Indonesia. The project was in question for validity of environmental permission and local communities had filed objection against JBIC. Coal is highly polluting and is incompatible with a 1.5 degree world, the aspirational climate target agreed to by country signatories to the Paris Accord in December 2015.

On November 14, Japan Bank for International Cooperation (JBIC) disbursed the first installment loan for 1000MW Cirebon coal-fired power plant expansion plan (Marubeni and JERA invested in), known as Cirebon 2, while the validity of the new environment permit, which has been recently issued, is still in question. (The total loan amount JBIC has signed in the loan agreement is around USD 731 million.)

Back in April 18, 2017, JBIC made an unprecedented decision to make a loan agreement only one day before the district court’s decision, even though the local residents had filed a lawsuit to demand the revoke of the original environment permit (issued in May 2016) and had repeatedly conveyed to JBIC the risk of illegality. However, the verdict on April 19 was in favor of the local community and declared the revoke of the original environment permit. Thus, JBIC couldn’t neglect it and needed to suspend its disbursement till today. The verdict has already become final after the defendant, or West Java provincial government, withdrew its appeal in August, which had been lodged once to Jakarta high court.

The local community and NGOs’ group, who are opposing the project, are ready to file a administrative lawsuit next week, demanding the revoke of the new environment permit. This means that it would be possible for Cirebon 2 project to be violate the laws of the host country and the “JBIC Guidelines for Confirmation of Environmental and Social Considerations” (Guidelines). This kind of JBIC’s attitude to neglect the lawsuit by the local residents is the same as JBIC concluded the loan agreement as described below. This time, JBIC has just had a meeting with the said local community and NGOs’ group in Indonesia last October to directly listen to their concerns and the judicial risks. Nevertheless, JBIC decided to disburse the loan with the premise of just pushing through the project. Thus, we express our strong objection against such JBIC’s premature decision and JBIC’s continuous neglect of the illegality as well as the local community’s voice and rights.

“It is very outrageous that Japan continues the plan to finance the Cirebon 2 coal fired power plant project in Indonesia. Japan has dirt on their hands lending money to project that violates national law, involves land grabbing and destroy local community’s livelihoods. People in Indonesia urge Japan to immediately stop the fund to a climate disrupting project and shift its resources to provide a clean people-centered renewable energy in Indonesia.” – Nur Hidayati, the National Executive Director of WALHI-Friends of the Earth Indonesia.

“While Japanese government and Prime Minister Abe himself commit tackling for climate change, what they are actually doing is destroying the planet. Despite the historical responsibility for causing climate change, Japan has a weak emission reduction target which is just a 3.8 percent reduction from 2005 levels, by 2020. This is an increase from 1990 levels of 5.8 percent. Japan should increase their ambition now and immediately stop funding dirty, destructive energy projects. ” – Ayumi Fukakusa, Climate Change and Energy campaigner of Friends of the Earth Japan

“We show our solidarity for communities who are fighting against dirty energy on the ground. This is unacceptable to see in only a few weeks, Japanese companies and banks decided to invest two coal power plants. We demand governments to stop new dirty energy projects and end public financing of fossil fuels. This includes Japanese funding of coal projects in Asia such as Cirebon 2. Funds need to be redirected away from dirty coal projects and instead used to support swift and just transition to democratic, pro-poor, renewable and clean energy systems for people and communities” – Lidy Nacpil, co-facilitator of the Reclaim Power initiative and coordinator of the Asian Peoples’ Movement on Debt and Development.