On September 8th, Coalition of Civil Society and local NGO made an action against environmental impacts of Malinau coal mining project in North Kalimantan. This project is partially invested by Idemitsu Kosan, an energy company in Japan, and is supported by JBIC (Japan Bank for International Cooperation). Washout from a sediment pond of Malinau coal mine has polluted the Malinau and Sesayap Rivers, and affected daily lives of approximately 30,000 people in Malinau.

The member of Mining Advocacy Network (JATAM) and local organizations, including students from Borneo Tarakan, joined actions in the front of Japanese Embassy in Jakarta and also in the front of the North Karimantan Provincial Government office in Tarakan city, demanding the government to revoke the mining business permit and the JBIC to stop funding the destructive project. 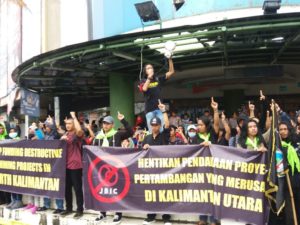 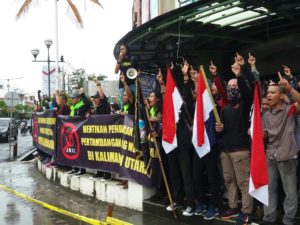 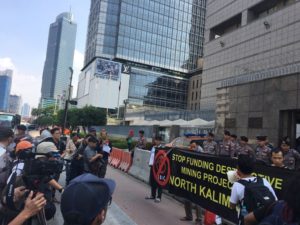 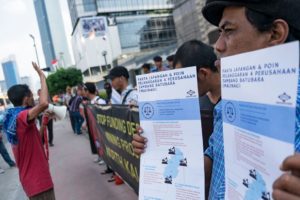 [Jakarta, Indonesia] – The Mining Advocacy Network (JATAM) has urged the Government of Indonesia for not only to impose administrative sanctions and suspension to four coal mining companies which had been violated and polluted the Malinau River in Malinau, North Kalimantan. The Government must also investigate the potential for serious environmental criminal violations.

These companies were proven to violate Article 96 to Article 98 of Law No. 4 of 2009 on Mineral and Coal Mining which regulates the violation of the management of waste, violation of quality standards and released the waste to the environment which is the Malinau River in Mid-June to early July 2017.

In the sanctions obtained by JATAM, the company also violated a number of other regulations such as Law No. 32 Year 2009 on Environmental Protection and Management, Government Regulation No. 55 Year 2010 concerning the Development and Supervision of Mining and Coal Mining Business Management and Ministry Regulation of Energy and Mineral Resources No 34 on Licensing in Mineral and Coal Mining, and Ministry of Energy and Mineral Resources on the Prevention and Control of Environmental Pollution to Work Safety Regulation.

“PT Mitrabara Adiperdana (MA) is partially owned by Idemitsu Kosan, an energy company in Japan, funded by JBIC (Japan Bank for International Cooperation), to take responsibility for this incident. As a funder, JBIC must also take responsibility for the company to take necessary response for the pollution in Malinau, “said Melky Nahar, Head of JATAM National Campaigner.

JATAM North Kalimantan states that the lending and borrowing process of sediment pond conducted by PT Mitrabara Adiperdana from PT Baradinamika Muda Sukses (PT BDMS) did not pass through the right process, it was done between companies without any notices to the government and society.

“Since 2010, for the first time, the sediment ponds of PT BDMS and PT KPUC’s waste collapsed and contaminated the Malinau River. We suspect this pollution was done intentionally and has happened repeatedly, “said North Kalimantan JATAM Coordinator, Theodorus G. Immanuel.

According to Theodorus, in 2010, Malinau’s locals conducted a demonstration related to the pollution of the Malinau River. However, in 2011 the same event recurred and caused the Malinau River and Sesayap River to be contaminated with toxic waste. Likewise in 2012, similar incidents repeated.

As a result of this pollution, the water of PDAM (Indonesia’s public water company) from Sesayap River can not be consumed by the people for three days (5, 6 and 7 July 2017).

“On July 6, 2017, the Head of the Health Service of Malinau stated that the drinking water in Malinau couldn’t be consumed. This refers to the Decree of the Minister of Health No. 907 / MENKES / SK / VII / 2002 on the Terms and Supervision of Drinking Water Quality that the standard NTU (Nephelometric Turbidity Unit) limit should be 5 NTU. Meanwhile, the level of turbidity of Malinau’s water reached 1993 NTU or almost 399 fold. The water then continued to flow but it was very turbid; this occurred on 8th and 9th of July 2017.

The Malinau’s PDAM distributed water to five sub-districts and 23 villages in Malinau District. “ The residents who are affected by their contaminated water source are estimated to be around 30,000 people “said Theodorus.

Since the coal mining activity in Malinau District, local residents feel the various destructive forces, especially those related to the environmental issues. These coal-mining concessions are close to residential areas and two major rivers are used to meet the daily needs of Malinau’s Malinau and Sesayap Rivers.

This destructive actions carried out by the coal companies’ impact to: First, Malinau PDAM (Indonesia’s public water company) must spend more to get clean water and restore the environment due to pollution; Second, Malinau residents lost their rights to water for almost a week, and after three days of total water supply stop, the muddy water flowed on 8 and 9 July 2017 and endangered the health of the people.

Thirdly, three Dayak community’s villages in the mining concession area has been moved (there is a one-time and twice-evicted) of Punan Rian Village, Langap Village, and Seturan Village, no clarity of process and handling of displacement let the area allegedly open for mining, which is human rights violations; Fourth, Sesayap River which is the habitat of living rare mammals, river dolphins (Pesut), the population has declined because of its contaminated habitat and cannot move freely by coal mining operations.

Previously, in April 2017, JATAM has reported PT. Mitrabara Adiperdana and PT. Bara Dinamika Muda Sukses – both of which are part of Baramulti Group – to the Directorate of Law Enforcement Ministry of Environment and Forestry (Gakum KLHK) related violation case in the preparation of Environmental Impact Analysis (Amdal) document, such as “copy and paste” found in the document.