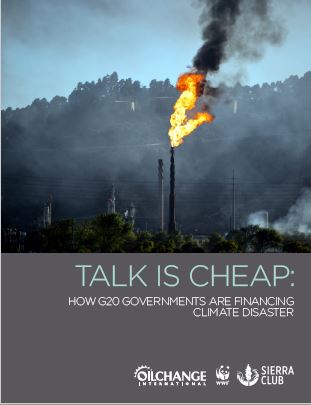 New report provides first-ever analysis of public financing for energy projectsEach year, G20 countries provide nearly four times more public finance to fossil fuels than to clean energy, according to a new report released today by Oil Change International, Friends of the Earth U.S., the Sierra Club and WWF European Policy Office. In total, public fossil fuel financing from G20 countries averaged some $71.8 billion per year, for a total of $215.3 billion in sweetheart deals for oil, gas, and coal over the 2013-2015 timeframe covered by the report. Fifty percent of all G20 public finance for energy supported oil and gas production alone.

The report, for the first time ever, details public support for energy projects from G20 public finance institutions (such as overseas development aid agencies and export credit agencies) and multilateral development banks. It finds that just 15 percent of this energy finance supports clean energy, while tens of billions of dollars are funneled to oil, gas, and coal producers annually. The best available science indicates that at least 85% of fossil fuel reserves must remain in the ground to meet the aims of the Paris Agreement on climate change. Yet of the $71.8 billion in fossil fuel finance, $13.5 billion goes to activities that supercharge the exploration phase for even more unburnable reserves of oil, gas, and coal.These findings directly contradict the goals espoused in the Paris climate agreement — touted by these same governments — which specifically calls on countries to align financial flows with low-emission development.

The report, entitled “Talk is Cheap: How G20 Governments are Financing Climate Disaster,” can be found at https://priceofoil.org/2017/07/05/g20-financing-climate-disaster. In addition to the authoring organizations, it has also been endorsed by CAN-Europe, Urgewald (Germany), FOE-France, Re:Common (Italy), Legambiente (Italy), Environmental Defence (Canada), FOE-Japan, Kiko Network (Japan), JACSES (Japan), and KFEM (Korea).

“Our research shows that the G20 still hasn’t put its money where its mouth is when it comes to the clean energy transition. If other G20 governments are serious about standing up to Trump’s climate denial and meeting their commitments under the Paris Agreement, they need to stop propping up the outdated fossil fuel industry with public money,” said Alex Doukas, Senior Campaigner at Oil Change International and one of the report’s authors. “The best climate science points to an urgent need to transition to clean energy, but public finance from G20 governments drags us in the opposite direction. We must stop funding fossils and shift these subsidies.”

Utilizing data from Oil Change International’s Shift the Subsidies database, the groundbreaking report analyzes support coming from public finance institutions — those institutions controlled by or backed by governments, such as export credit agencies and development finance institutions. It looks specifically at provision of grants, equity, loans, guarantees and insurance by majority government-owned institutions for domestic and international fossil fuel exploration and production. It presents a detailed picture of public finance for all energy — clean, fossil fuel, or otherwise.

“G20 leaders may like to talk about climate, but it’s clear their talk is cheap,” said Kate DeAngelis, international policy analyst at Friends of the Earth U.S. “While praising each other for investing in renewable energy at home, they bankroll billions of dollars for dirty fossil fuel projects in developing countries. G20 leaders’ handouts to fossil fuel companies destroys the health of people and the planet. G20 countries must commit to transitioning from brown to green, once and for all.”

The report shows that public financing for fossil fuels has a three-pronged effect on efforts to address climate change. First, it acts as a “negative carbon price” that helps to subsidize and incentivize more fossil fuel production. Second, it helps drive high-carbon lock-in, making the transition to clean energy more difficult and costly. Third, this public finance makes uneconomical dirty energy economical, thereby enabling “zombie energy” projects that would never even begin operating without such support.

“When the G20 countries committed to the Paris Agreement, they made a pact with the world that they would take meaningful steps to reduce their carbon emissions in an effort to avert the worst effects of the climate crisis,” said Nicole Ghio, a senior international campaign representative at the Sierra Club. “But as we now know, these countries have been talking out of both sides of their mouths. It’s unconscionable that any nation would continue to waste public funds on fossil fuels when clean energy sources like wind and solar are not only readily available but are more cost-effective and healthier for families and communities across the globe. It is past time for G20 nations to stop subsidizing fossil fuels once and for all.”