Despite unsolved troubles caused by Cirebon 1 (660MW, commercial operation started in 2012) and an ongoing legal challenge for Cirebon 2 (1,000MW),  the Japan Bank for International Cooperatoion (JBIC) had consluded a loan agreement for Cirebon 2 on April 18, the day immediately before the court verdict was due. On May 24, 2017, two community members affected by “Cirebon Coal-fired Power Plant Project in West Java, Indonesia” (*1) came over to Japan and handed the objection to the JBIC on the expansion of Unit 2 power plant. At the same time, Indonesian and Japanese NGOs handed the complaint to the Japanese National Contact Point (NCP) (*2) under the OECD Guidelines for Multinational Enterprises (MNEs). Japanese public and private sectors, including Marubeni and JERA as investors, have pushed through the project.

(*2) NCP: National Contact Points
NCPs are composed and organized by each adhering governments such that they promote and implement the Guidelines, and provide an effective basis for dealing with the broad range of issues covered by the Guidelines. Japanese NCP consists of Ministry of Foreign Affairs (OECD Division, Economic Affairs Bureau), Ministry of Health, Labor, and Welfare (International Affairs Division), and Ministry of Economy, Trade and Industry (Trade and Investment Facilitation Division, Trade and Economic Cooperation Bureau).

Press conference was held on May 24 morning and the document submission to the JBIC and NCP on the same day afternoon.

Among 4 members who came over to Japan were; two members from the local community group RAPEL, a staff of WALHI (Wahana Lingkungan Hidup Indonesia) and a lawyer, who has been supporting the local community. RAPEL submitted the objection to JBIC and demanded the suspension of its loan disbursement for the project, pointing out several violations of JBIC’s environmental and social guidelines, such as the compliance of host country’s law and the submitting of environmental permit. WALHI and FoE Japan also submitted the complaint to the Japanese NCP, claiming that the Japanese companies, Marubeni and JERA, are breaching the OECD Guidelines for MNEs. The OECD Guidelines stipulate that obeying domestic laws is the first obligation of enterprises.

Submitting document to the JBIC

During their visit to Japan for several days, the community members and NGOs had separate meetings with JBIC, Ministry of Finance, and Marubeni, and took a protest action in front of JBIC. They also spoke in a press conference and a seminar, reporting their current situation affected by the project, the contents of the lawsuit and the district court’s verdict, and the reason why they decided to submit the objection to JBIC this time.

The Unit 1 of the Cirebon project (660 MW) has already caused serious damages to the livelihood of local community, such as small fishery. In order to prevent further damages to their life, the community group, Rapel (Rakyat Penyelamat Lingkungan: People Environment Safer) filed a lawsuit against the provincial government of West Java, claiming that the environmental permit for the Unit 2 project hadn’t been issued in proper manner. On April 19, the district court in Bandung admitted the community’s complaint, and revoked the environmental permit in its verdict.

On the other hand, even though JBIC confirmed in its own response in the Diet on April 13 that it had recognized the progress of this court case, JBIC signed the loan agreement for the Unit 2 project on April 18 one day before the court decision, neglecting the residents’ rights and the judicial decision in the host country. As the West Java provincial government has already expressed its intention to lodge an appeal to the High Court on April 21, the environmental permit is currently still valid till the High Court or the Supreme Court concludes a verdict on this lawsuit. Thus, it is highly concerned that the project proponent would start the main construction work to build the Unit 2 power plant and that JBIC would disburse the loan for the Unit 2 project, even before the final court decision.

JBIC must closely investigate the illegalities of the Cirebon Unit 2 project, listening to the local people’s voices but not only what the companies and the government are stating. Japanese government and JBIC must sincerely take it into account the local community’s rights and the judicial decision in the host country and must not disburse its loan for the project. 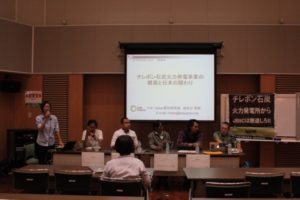 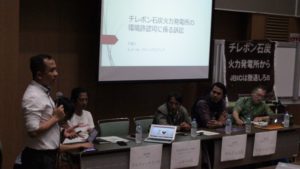 On May 25th, the local community members and NGOs held a protesting action at front of the JBIC. 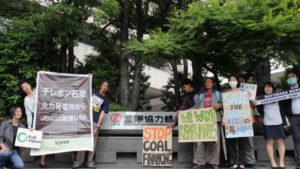 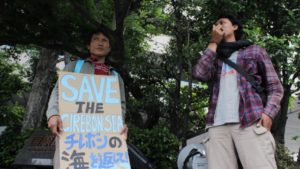