Indonesian Batang Villagers Filed the Objection against JBIC
“Coal-fired Power Project Made Our Life Worse and Caused Human Rights Violations”
Stop the Construction and Restore the Farmland and Fishing Grounds!

On December 5, eleven local community leaders, who has continued to oppose “Batang Coal-fired Power Plant Project” (*) for five years, visited the Japan Bank for International Cooperation (JBIC) Jakarta office and submitted their objection against JBIC (18 villagers signed on it as community representatives. The signatures of more than 900 villagers who supported this objection were attached, too.) In the objection paper, the villagers pointed out that the project has failed to comply with “JBIC Guidelines for Confirmation of Environmental and Social Considerations” as it has made their life worse and has caused the violations of human rights. Also, they requested the immediate stop of any construction work and the restoration of their farmland and fishing grounds, and urged JBIC to carefully investigate the violations of its Guidelines through direct dialogue with the project-affected community and to reconsider its decision to provide the loan for this project. In June 2016, JBIC decided to provide the huge loan (around USD 2.1 billion) for this project, which Japanese public and private sectors are pushing through. 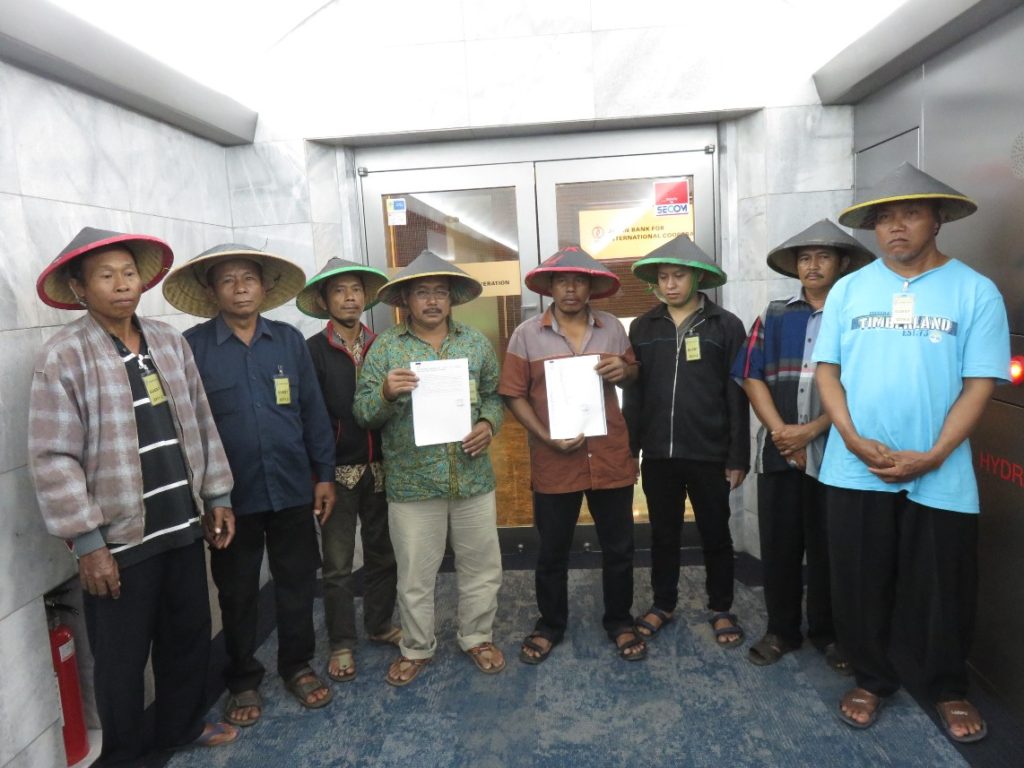 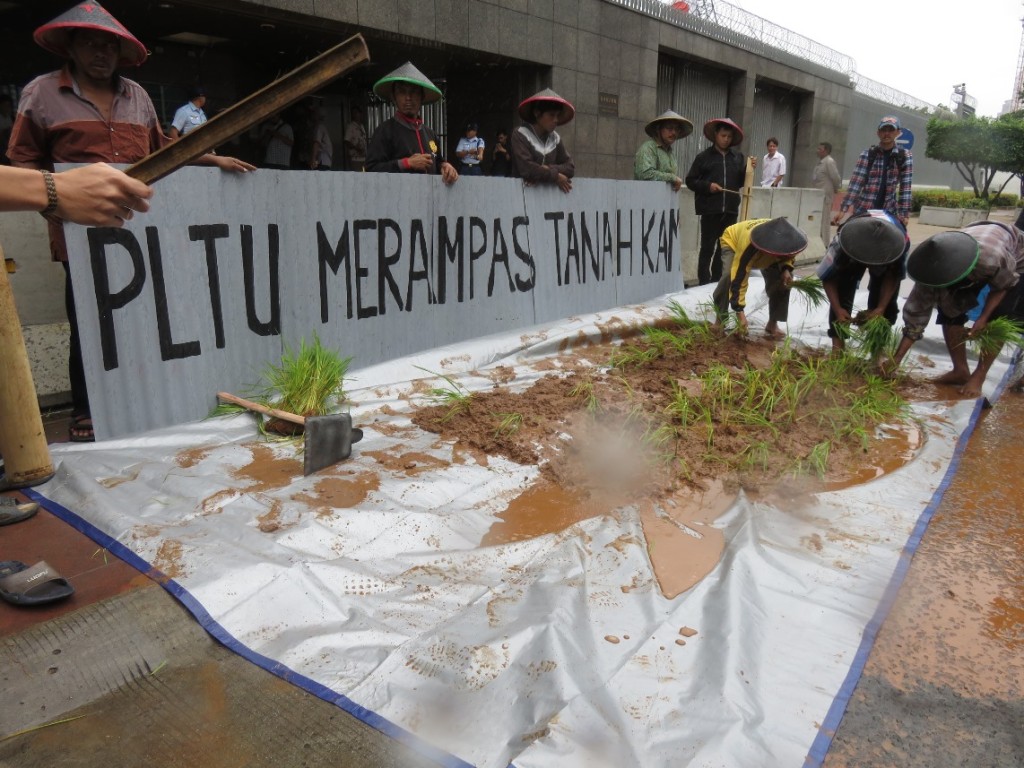 The villagers and local NGO also took their protest action in front of Japanese Embassy, playing to show the situation that the farmers were deprived of their access to their farmland due to the fence surrounding the proposed project site. They called on Japanese government to immediately stop supporting for coal-fired power plant projects which destroy the local people’s life and cause huge impacts on global climate change.

The project has faced the strong opposition of the local community who are concerned about the impact on livelihoods and health, and the commencement of the construction was postponed for almost 4 years. In addition, the National Human Rights Commission (NHRC), an independent government agency in Indonesia, issued its recommendations several times, urging the project proponents to improve the conditions of human rights related to the project, as serious human rights violations occurred against the community leaders opposing the project and landowners refusing to sell their land in the proposed project site, such as intimidation, violence, arbitrary arrest and harassment at the hands of the army, the police, and other actors. Thus, domestic and international civil societies have strongly objected to JBIC’s decision to provide its loan for the project last June 2016.

Even after JBIC’s decision, the local community has continuously expressed their strong opposition against the project, while the construction work is pushed through in the proposed project site. The farmers are suffering from very severe life conditions due to the loss of livelihood, or farmland, after the fence was established surrounding the proposed project site. Nevertheless, at least 46 landowners have refused selling their land for the project and have refused receiving the compensation for land till today even after the forcible land acquisition by the project proponents. Also, the fishermen have repeatedly taken their protest actions, while the construction of a jetty facility has been commenced, which has started to cause some clear impacts on fishery. As requesting in their objection against JBIC, the farmers and fishermen, who are continuously opposing the project, are wishing the restoration of their livelihood, or their farmland and fishing grounds, from the bottom of their hearts, so that they can continue the same life as before.

This is the 2nd project on which the local community filed the objection against JBIC, following the Cirebon Coal-fired Power Plant Project (The capacity of the 1st existing plant is 660 MW. The one of the proposed expansion plant is 1000 MW.) last month, where the affected villagers also pointed out the serious impacts on their livelihood and health. (The objection case on the Cirebon project is currently under the preliminary investigation by the JBIC’s Examiners, which is supposedly followed by the main investigation. In the main investigation, the Examiners are supposed to make an investigation report on the compliance of JBIC Guidelines etc. within 3 months.)
Japanese government and JBIC must solve the existing problems, sincerely accepting the Objections from the local villagers of Batang and Cirebon, and must immediately stop its support or finance for any new coal-fired power plant, not ignoring the concerns and voices of the local people and international civil societies.

(*) Batang Coal-fired Power Plant Project, Central Java, Indonesia
Two Japanese companies, J-POWER and ITOCHU, have invested in the project. Japan Bank for International Cooperation (JBIC) and private banks have decided to provide the loan (around USD 3.4 billion) for the project (JBIC’s part is around 60 %, or around USD 2.1 billion. The entire project cost is approximately USD 4.5 billion.). If built, the power plants (2,000 MW) will be one of the biggest coal-fired power plants in Southeast Asia.