E3G, a British NGO promoting a low-carbon economy, released a report that ranks G7 countries’ policy on coal in a press conference on October 21, 2015. E3G looked at 3 points of each of the G7 countries’ coal use: 1) the risk of new coal power plants, 2) the retirement of existing coal power plants, 3) international impact. Japan was ranked ‘last’ for all 3 points, and it was obvious that the remaining G7 countries’ move from coal isolates the country. Not only are there no signs that Japan will take steps towards decarbonization to avoid further climate change but Japan keeps putting out plans for new coal-fired power plants. Japan intends to continue their high dependency on coal, which has given Japan a bad reputation, however exports and financial support related to coal power plants for developing countries also contribute to the nation’s lowest rating.

Overall, The United States ranked first due to the nation’s positive steps toward fighting climate change. For example, the US has introduced new policies — notably one that required new coal power plants to set CCS (carbon capture and storage) technologies in place — and restricted financial support for coal plants without CCS technologies, while accelerating the phasing out of existing coal plants.
Other G7 countries are also taking measures, such as the phase-out of coal-fired power plants and restriction on coal finance.

Not only is each G7 country p 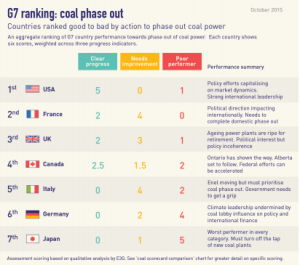 romoting various measures for coal-fired plants, but the ratio of coal compared with other types of power generation is also dropping. When looking at the capacity of coal power, the total capacity for U.S. plants is significant. It is over twice as much (288 GW) as some other countries, however coal-generated power is clearly falling. The U.S. aims to cut the total amount of power generated from coal by as much as 80 GW by 2020. On the other hand, the ratio of coal capacity in Japan is steadily increasing. Japan’s nuclear power plants were shut down after the Great East Japan Earthquake thus raising the country’s dependency on coal. This stance deviates from the other G7 countries, which are striving for the increase of renewables.

The G7 countries emitted only 22.4% of total greenhouse gas (GHG) emissions (in 2012), but emissions from developing countries will increase along with the increase of coal power generation. There are plans for 2,177 coal-fired power plants projects all over the world. These plants, should they be put into operation, will emit GHG gasses for 40 years. The impact is significant.

The E3G states that all G7 countries should work together to promptly strengthen conditions for the Organization for Economic Cooperation and Development (OECD) to shift from supporting coal to renewables. Unfortunately, the nation that is dragging down the global movement away from coal is Japan. In June at a G7 summit in Elmau, in order to prevent dangerous climate change, the countries agreed on  “decarbonisation over the course of the century”. The E3G report, which came after the G7 summit, was the first time that the nations’ steps towards moving away from coal was evaluated. Through this evaluation, it was clear that Japan has developed a bad reputation for supporting coal projects.

Japan needs to take this report into serious consideration and end their dependency on coal.

Bloomberg: Japan `Odd One Out’ Among G7 in Move Beyond Coal, E3G Says