From July 28th to August 2nd, 3 local villagers from Batang, Central Java, Indonesia, who has been opposing the construction of the Batang coal-fired power plant, and 2 staffs from a local Indonesian NGO, who has been supporting them, came to Japan. They achieved various activities in their weeklong stay in Japan, such as formally filing an objection to the proposed financier, and joining a press conference and seminars, as described below.

Behind the construction of the Batang coal-fired power plant

Both the private and public sectors in Japan have promoted the Batang coal-fired power plant. However, local residents have been strongly opposing the project, which has led the project delayed for 3 years. Locals are particularly concerned about the effects the plant will have on their livelihoods, such as agricultural land and fishing area, and on the overall environment of their community, and have protested the project. But the villagers have been the victims of human rights violations, such as physical violence, intimidation and unfair arrests by the military and police etc. In spite of this difficult situation, local representatives came to Japan to formally file their objection to relevant government agencies, including Japan Bank for International Cooperation (JBIC). Pointing out the many issues related to the project, they urged Japanese project proponents to stop the project.

More than 10 members of the media attended a press conference to listen first-hand to 3 local villagers (2 farmers/landowners and 1 fisher). Two landowners have still to this day refused to sell their land to make way for the massive coal project. At the proposed site of the coal plant, the land is so fertile that farmers can harvest rice 3 times a year. The coal plant would not only adversely affect agricultural land but there are also concerns about the negative impacts on the equally rich marine areas. These are just a few of the concerns villagers have over the coal project.

After hearing about the local situations from the villagers, the media asked several questions, such as about the land acquisition. By listening to the locals directly, they could learn a lot of inside stories in detail. It is questionable as to whether the relevant Japanese government agencies and companies have been aware of these local problems. 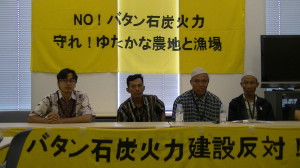 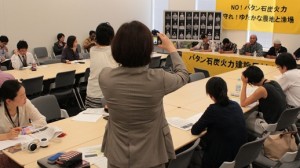 In the afternoon, the three Batang locals personally submitted their objection to JBIC and the Japanese National Contact Point (NCP) set up under “the OECD Guidelines for Multinational Enterprises,” which the three Japanese Diet members witnessed.. In the complaints, they urge JBIC and the Japanese companies to halt the project-related works, carefully review the environmental and social impacts of the project, and address the issues appropriately. JBIC responded,  “We haven’t yet decided  to finance the project. However, we would like to understand what the locals stated in the objection and would like to consider financing the project or not. With respect to the environmental, social and human rights issues behind the exports of Japanese infrastructure technology abroad, it is strongly recommended that both the Japanese public and private sectors sincerely address the issues.

(Submission of the objection to JBIC (left) and NCP (right)) 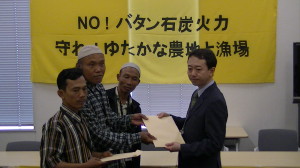 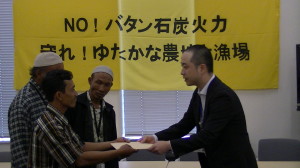 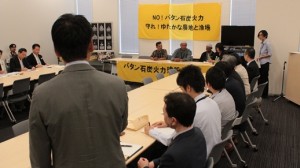 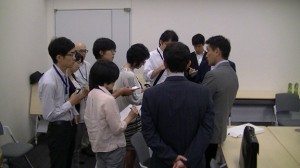 ■Protest actions in front of JBIC HQ on July 30th & as well as ITOCHU on July 31st
We gathered in front of the JBIC headquarters on the morning of July 30th, and in front of ITOCHU headquarters the following day on July 31st. As employees made their way to work, we chanted “Stop giving Japanese loans to coal projects” and “Save Batang’s rich farmland, marine waters, and livelihoods from coal” while handing out flyers. The Batang locals’ voices rang out as they urged for the end of the coal project in their community. We will be on the lookout for the Japanese government, JBIC, ITOCHU, J-POWER and other related companies’ next moves. 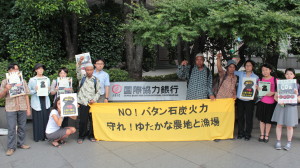 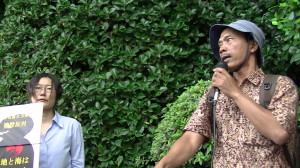 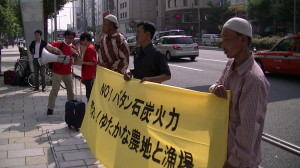 On the afternoon of July 30th, we held a seminar in the parliament members’ building where the villagers reported the issues with the Batang coal plant,  and answered the questions about what they stated in the objection. The main point of discussion has been  whether there have been sufficient human rights and environmental considerations for the Japanese infrastructure projects abroad. Discussion even led to BPI’s (Bhimasena Power Indonesia, the primary project proponent of the Batang project)* trouble with acquiring land, which eventually forced the company to declare a force majeure in the project in 2014.

On July 30th in Tokyo at Hosei University and on August 1st in Kyoto at Hitomachi Exchange Center, we were able to reach a wider audience through public seminars. The Batang locals were again able to voice their concerns, and there was also some explanation about JBIC’s social and environmental consideration and the challenge for Japanese companies to address the human rights problems incurred by projects abroad. In addition, with Indonesia’s energy demand predicted to rise in the near future, the question of adopting of renewable energy was also brought up. The Indonesian NGO staff responded that they have approached the government in pushing forward the development of renewables. At the seminars, the Batang locals expressed the urgent issues and difficulties they have experienced in their communities.

Through these events, the locals were able to tell their stories in detail. Even with all the hardships they’ve had to endure and the continued opposition by the communities, why would Japan continue to invest in this project? 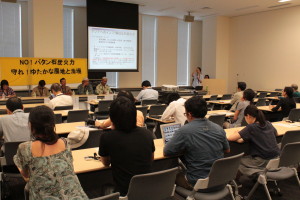 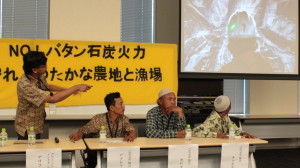 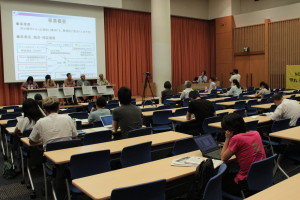 The plight of local villagers who have been spoken out 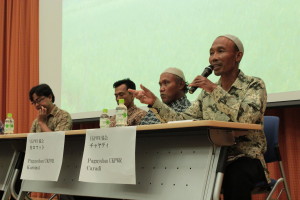 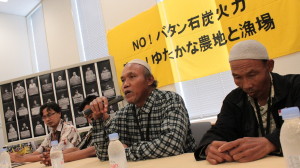 Excerpts from our Q&A session:

Q: Is it clear that the military is involved?
A: The Indonesian army does not hide their identity as they wear uniforms. The heavy equipment used also had a logo with the text “ZENI AD” which indicated they were military engineering vehicles. However, 2 days before JBIC conducted a fact-finding mission as part of their environmental review, the military had stopped leveling the land. Since the JBIC’’s visit, the military has yet to restart with the machinery left idle on the agricultural land.

Q: What about the unfair arrests?
A: As it stands, 7 leaders of the villagers who oppose the project have been imprisoned even though not even one knows anything about the reason for such arrests. Although 2 of the leaders were found not guilty in the Indonesian Regional and High Courts, a Supreme Court ruling put them in jail for 7 months. The imprisonment was due to the leaders’ rejection of an offer by a local government official to purchase land at a high price if the leaders support the coal project.

Q: Who funds the thugs that have threatened the villagers who oppose the project?
A: This thug group is made up of villagers, such the ones who have no job. It is suspected that there are some funds and involvement from the former governor of Batang, but there is no evidence. Every October, around the time of loan procurement deadline, there is a rise in intimidation incidents involving local thugs. There also has been a report that BPI has been secretly funneling funds to them as well. If the thugs are successful in pressuring landowners to sell their land, they would be rewarded 5% of the total sale of the land – this also fuels the thugs’ motivation.

Q:  What is the status of the land acquisition?
A: A lot of the land has been sold but approximately 20 hectares (about 9-10%) are still remained unsold. There are many landowners that gave in to pressure and ended up selling their land. Moreover, the value of the land has gone up and landowners who had sold their land prior to this are requesting extra compensation. For those who haven’t sold their land yet, they fear that if the government’s Land Acquisition Act (Law No. 2/2012) is applied, landowners may not get the same amount of compensation or any monetary compensation. The Land Acquisition Act should not be applied to a private business matter, such as this project. It should be applied only to a public developmental project. There has been no clear explanation yet about this point.

Q: When JBIC did a fact-finding mission, why did they not meet with villagers?
A: In July 2013, immediately after they began to consider financing the Batang project, they did a fact-finding mission. However, they did not meet with villagers. During a site visit in May 2015, although a meeting was set up between a few village heads, there was no opportunity for the villagers who oppose the project to meet with JBIC. Since a letter previously sent from the villagers has gotten no response, essentially ignored by JBIC, they  have decided to formally file their objection.

Q: Why has only the Batang coal-fired power plant in particular such a big problem?
A: In Indonesia, there are many power plants. Until 1998, for power plants built under President Suharto’s regime, it was not possible to object due to political oppression. It wasn’t until 2008 when problems with the startup of power plants arose that residents were able to voice their opinions with the change in political atmosphere. Thus, the villagers of Batang could voice their concerns. The villagers of Batang are united and have voluntary started to take action against the coal project. Since the planning stages of the plant, many human rights violations have emerged. The construction of a new coal plant in Batang goes against the global trend away from the operation of coal plants. Compared with other power plants in Indonesia, the Batang coal plant has been widely talked about.

Q: What happened to the Batang landowners who sold their land?
A: There seems no reply to the landowners who are seeking additional compensation from BPI. Although many of those who have sold their land are unemployed, there are some who continue to cultivate their land to make a living as the project proponent hasn’t yet used the land.

Q: What do you think about the energy demand in the future and the use of renewables in Indonesia?
A: As Indonesia is a developing country, it is predicted that energy demand will rise in the future. Because the development of the project will depend on the sacrifices made by villagers who have led a sustainable life, we oppose the construction of the Batang coal-fired power plant. Since Indonesia is abundant in natural energy resources, NGOs urge the Indonesian government to endorse the development of renewable energy, which doesn’t rely on fossil fuels. It is unfortunate for Japanese corporations and JBIC (with their technical capabilities) to invest in coal. At this rate, renewables won’t make up more than 5% of Indonesia’s energy mix. It’s necessary for Indonesia to adopt measures that expand renewable energy.

Throughout the Batang locals’ trip to Japan, from the meeting with JBIC to the seminars, they spoke out about the problems and their demands, and appealed to the Japanese proponents and the public to end their loans and investment in the coal project as soon as possible. They oppose the policies that expand the export of Japan’s large-scale infrastructure as they have realized the hidden meaning behind the export of “Japanese companies’ high technical abilities”. These companies should instead shift to more sustainable energy sources that are environmentally friendly and beneficial for communities. We hope that they have a chance to think about the side effects of Japan’s “high technology” and whether or not they should continue endorsing coal projects both in Japan and abroad even though global trends show that coal is becoming a thing of the past.