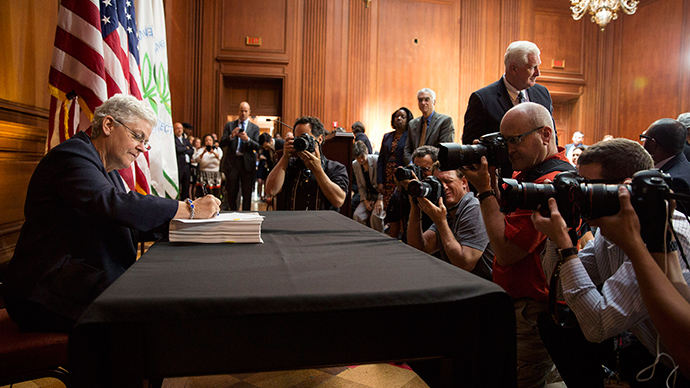 On June 2nd, 2014, the US made a historical step forward to combat climate change. The US Environmental Protection Agency (EPA) announced their “Clean Power Plan”, newly proposed guidelines that will have the power sector reduce carbon emissions by 30% (compared to 2005 levels) by 2030 across the US. US President Barack Obama has stuck his neck out in the name of cleaner air to push for EPA regulations for coal-fired power plant emissions in the US, an unprecedented move. These guidelines include state-specific goals to reduce carbon emissions meaning that individual states can choose how to meet the goals, such as through fuel switch, energy efficiency, or demand-side management. However, it is clear that these guidelines will push for state level actions.

Proponents of the EPA’s measures hail the president for pushing for this milestone move to cut the nation’s carbon emissions. In a press release by the EPA, these new guidelines will not only reduce CO2 emission, but also drastically reduce particle pollution, nitrogen oxide and sulfur dioxide by up to 25% and can greatly reduce premature deaths, asthma attacks and missed work or school days. The EPA reports that these changes could save the nation $50 billion USD in health care costs due to air pollution. Before the new EPA guidelines were even officially announced, they were met with backlash from business leaders, politicians and climate change skeptics. However way we look at Obama’s fight against climate change, the benefits of improved health and cleaner air are invaluable and should not be overlooked.

This new move by the EPA could serve as a hook to convince other countries to consider similar regulations for power plants. Japan’s current move to promote coal power plants is in complete contrast to the policies of the US. Japan disappointed the international community in 2013 by brushing off climate change concerns by announcing a greenhouse gas “reduction” target for 2020 which is actually a 3.1% increase compared to 1990 levels. It is imperative that Japan carefully examine the role the power sector has on CO2 emissions and reflect on the actions that the US and other countries have taken to reduce their greenhouse gas emissions to fully understand the issue.