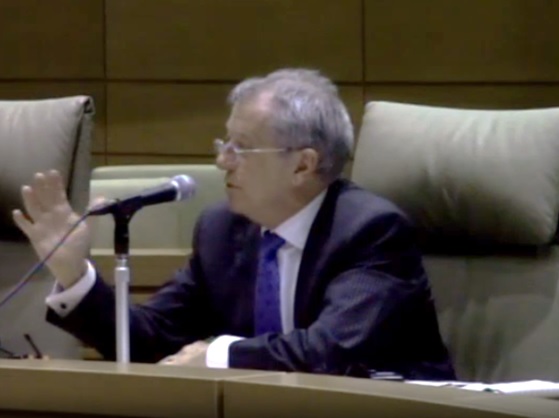 On May 13th, 2014, Sir David King, special representative of climate change for the UK government addressed Diet members, government officials, NGO representatives and the media in Tokyo as part of a series of diplomatic talks he has been making around the world. The UK government has been seen as a world leader in taking action on climate change issues. Sir David King stressed that taking action cannot be put off any longer. To keep increases in global temperature below 2 degree Celsius, we must limit annual greenhouse gas emission to 2 tons per person by 2050.. The UK government has taken on this problem head on by setting a target of 80% reduction in CO2 emissions by 2050 which is written in the UK parliamentary act, making it near impossible to reverse.

When the issue of Japan’s growing interest in expanding their domestic coal power plant fleet came up, Sir David made it very clear that to meet the goal of 2 tons per person per annum, Japan must break away from coal. New coal plants and the negative environmental impacts of “so-called clean coal technology” is not the only issue. King went on to state that should Japan take this route there is “a severe risk of creating large scale stranded assets (…) for the year 2050 when I believe carbon dioxide emitting power stations will have to be shutdown worldwide.” The UK government has been very active in promoting cleaner alternatives to curb greenhouse gas emissions and has been instrumental in making renewable energy more affordable. By investing in these technologies now, they believe we will be able to see the price of installation fall in the future.

The head of energy and climate change at the British Embassy in Japan, Richard Oppenheim, sees our fight to battle climate change as an exercise in risk management. It is vital to invest in technologies that have zero emissions which ultimately mean breaking away from polluting fossil fuel alternatives like coal to minimize risk as much as possible. With that being said, it is inadvisable for Japan to turn to coal at the 11th hour when the time to take action against climate change is now. Preparations leading up to COP21 in Paris will be critical as a universal climate change agreement will be made. Will Japan step up to the plate?