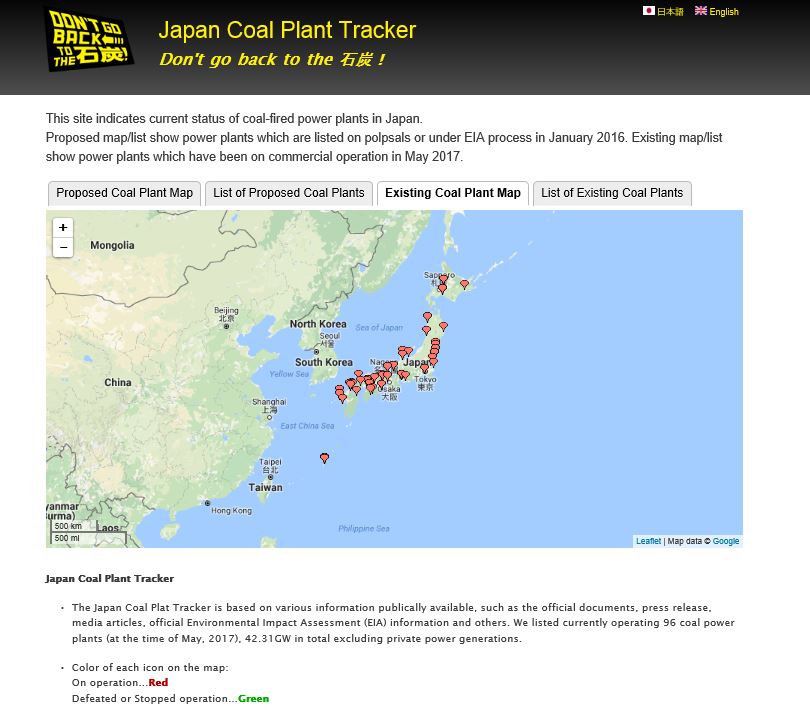 Since the accident of Fukushima Daiichi Nuclear Power Plants, a number of coal-fired power plant plans have been proposed, enlivened with governmental energy strategy and electricity deregulation started in 2016. Thus, we started to monitor the projects and provide the latest status of these proposed coal plants on the website “Japan Coal Plant Tracker”.
In Japan, however, we are also facing the problem of plenty of old power plants in-service. Japanese government sets standards of generation efficiency for coal-fired power plant to fit with electricity mix in 2030 and electricity provider has to comply the target. In addition, according to the latest study, developed countries must shut down all coal-fired plants, both new and existing, by 2030, in order to achieve 1.5-2.0 degree target under the Paris Agreement. For this reason, it actually requires front-loading measures. However, plans of substantive future closing nor shutting down on currently operating plants aren’t disclosed at this point.

Kiko Network has redeveloped our “Japan Coal Plant Tracker” by adding currently operating plants as of May 2017. There are 96 units of existing coal-fired power plants with generation capacity of 42.31GW in total (excluding in-house power generations).
The map shows distribution and dense area of existing coal-fired power plants across the country and a list indicates available detailed information, which will be updated regularly.

The “Japan Coal Plat Tracker” is based on a various information publically available, including the official documents, press release, media articles, official Environmental Impact Assessment (EIA) information and others.

Some uncertainties remain on particular plant data due to lack of information. All information is written with the responsibility of Kiko Network.