Japan has 94 coal fired power plants in total (see map), with 45 for 10 electricity companies and 49 for other industries.  In addition, many businesses have private electrical power generators fueled by coal, ranging from small generators to very large ones with significant amount of emission. Additionally, there are four plants that are either under construction or are planned to be constructed in the near future.  2 power plants, the Hirono no.6 (600MW) and Hitachinaka no.2 (1000MW), are ready to begin operation within the year 2013. (Source: Electric Utility Hand Book 2012 edition, Thermal and Nuclear Power Generation Handbook Revised 2011 edition) 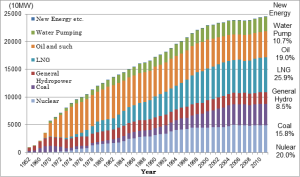